"Dr. Low and his company have done some outstanding work in this field" - Stephen Hawking 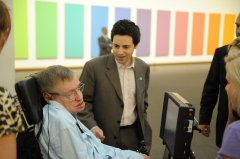 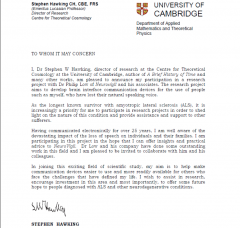 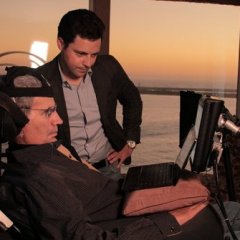 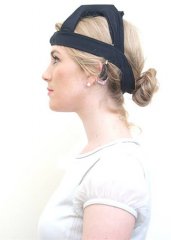 In 2011, NeuroVigil launched an all out effort at the request of NeuroVigil advisor, Stephen Hawking, to come up with a computational cure for Locked-In Syndrome, with the goal of enabling ALS sufferers to keep being able to communicate... via their minds. In 2012, NeuroVigil began a clinical trial on ALS in Philadelphia in partnership with Terry Heiman-Patterson, and in 2013, Augie Nieto, who was introduced to NeuroVigil by Qualcomm chairman Paul Jacobs, became the first iBrain empowered ALS sufferer to spell a word with his mind: "communicate". In January 2014, a patent was submitted and accepted by the U.S. patent office for a method of extracting brain activity.

To help accelerate our efforts to keep the voices of ALS patients heard, please contact This email address is being protected from spambots. You need JavaScript enabled to view it.

Philip Low and Stephen W. Hawking: Towards Establishing Neural Correlates of Intended Movements and Speech
Francis Crick Memorial Conference, Cambridge, UK, 7 Jul 2012
Single-Channel iBrain EEG recordings were conducted in a high-functioning 70 year old ALS patient attempting to move one of four limbs after a verbal cue: the left and right hand and foot. Raw EEG signals were analyzed with the SPEARS algorithm in order to make high-frequency/low spectral power signals detectable. Concurrent video recordings were obtained. During the attempted movements, the subject's brain activity demonstrated distinct broad-spectrum pulses extending to the Gamma and ultra-high Gamma ranges. Such pulses were present in the absence of actual movement and absent when the subject was not attempting motion. Activity in the Alpha range was detected when the subject closed his eyes, as expected. The emergence of such high bandwidth biomarkers opens the possibility to link intended movements to a library of words and convert them into speech, thus providing ALS sufferers with communication tools more dependent on the brain than on the body.

If Hackers Inherit the Earth

"By seeing the activation of particular brain structures, we can tell, ‘Ah, this person is trying to move his hands,’ ” explains Philip Low.

The researchers traveled to Dr. Hawking's offices in Cambridge, England, fitted him with the iBrain headband and asked him ''to imagine that he was scrunching his right hand into a ball,'' Dr. Low said. The algorithm was able to discern Dr. Hawking's thoughts as signals.

"Dr. Low and his company have done some outstanding work in this field," Dr. Hawking said in a statement.